My name is Sylvain Lafrance, I’m from Québec, Canada. Before beginning, English is not my main language. Please excuse any mistakes I could have done in my posts.

As far as I can remember, I always liked electronic and computer stuff. My first contact with a “computer” is when I was in 5th or 6th grade. A teacher brought to his class a Commodore 64 to show us what a computer was. At this time, having a computer at home or even at school was extremely rare.

I’ve got my first computer in the early ’80s. It was a Commodore Vic-20 that my parents bought me. I remember learning to type on the keyboard, seeking through all the keys with my finger to find out the right letter. I didn’t even have a dataset yet, so you can guess that my little programs were erased every time I turned the computer off. But it was okay, I was more learning to type and trying to understand a few basic commands. A few weeks later, I bought a dataset then I was able to build bigger (under 3.5 KB !) programs and to save them. All this connected to a 12” black and white cathodic tv!

Like most people who started with a Vic-20, I’ve saved all my money and have upgraded to the C64 with a floppy disk drive. We were a handful of guys at school with C64s, we were exchanging programs and games. It was also the time where we were punching a hole on the side of a 5.25” floppy disk so we can use both sides of the disk!

By the end of my 10th grade, I’ve bought an 8088 clone computer with a 10MB hard disk and started coding more seriously. In the next few years, I’ve learned Turbo Pascal. Even after those 30ish years, Turbo Pascal still my preferred language.

In the following years, I’ve frequently upgraded my computer and eventually left DOS and adopted Windows 3.0 like most people at this time. Even if Windows was getting in popularity, I kept coding in Turbo Pascal. I did a shareware named “HD-Driver”. It was a file manager program used to copy, move, and erase files. I sold a few copies in the US and Canada. It was in 1988-1990 years.

Once I’ve graduated in computer science, I’ve been lucky to have jobs where I’ve learned and perfected different languages like dBase/Clipper, HyperCard, C, C++, Fortran. As a hobby, I was still coding in Turbo Pascal and Delphi. No specific projects but just for the fun of coding.

Five years later, I’ve slowly stopped coding. I was then in the early 20ish and I had different interests. However, I never stopped thinking like a developer and all the things that I’ve learned in the previous years have always served me in my system administrator jobs. It’s always easier to understand problems when we can imagine how things are coded!

Back in love with coding:

My love for coding came back in 2016. I was having hard times with anxiety and burn-out and I needed something to change my mindstate. I’ve installed Xcode and started learning Swift. Just between you and me, getting back into coding has been really difficult but so much rewarding. A lot of things have changed in 20 years! Fortunately, coding is still coding and the basic concepts never changed.

At first, coding and learning Swift was just a kind of mental therapy. The better I was at coding, the more I wanted to learn. I then started coding small apps (programs are now called apps!). I’ve published my first iOS app on the App

Store a few months later. This was a very simple game where the goal was to tap the screen to keep a soccer ballon above a line at the bottom of the screen. I really don’t care if my game was good, bad, or how many downloads it got. All that was important was being able to say that I had an app on the App Store.

Since 2016, I never stopped coding for iOS devices. I’ve published a few other apps since then. You can find them here on the App Store.

Coding is my hobby and my passion. Some people like to paint, work wood or play golf, me, I like to code. Coding is good for my mindset, helps me to focus on a single thing, and drastically calms the little monkey in my head.

I hope you liked my story and maybe it will inspire you in anyways. Don’t forget, there is no age to start writing your first lines of code!

Good news, I’ve finally released HoursCal 1.0 on the App Store.   After many months of coding and testing, I’m really proud […] 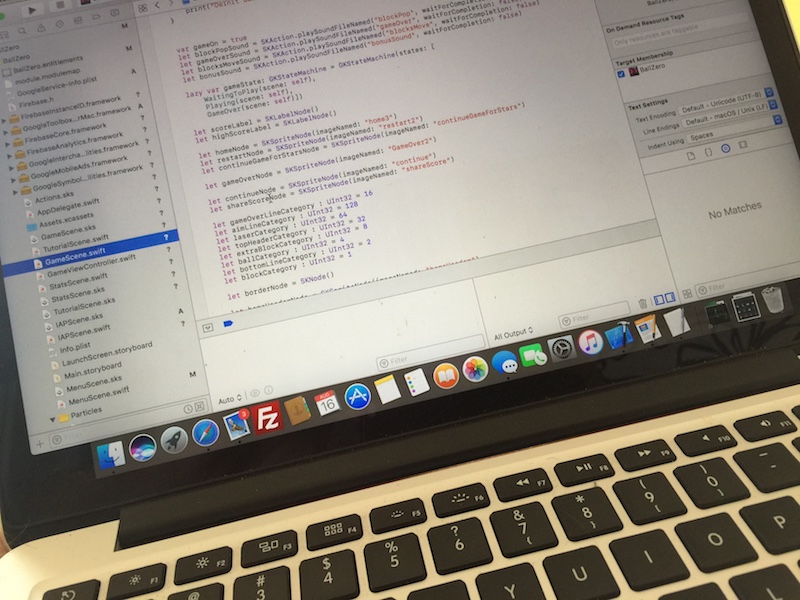 Programming allows me to reduce my anxiety, to reduce my stress, and to calm the little hamster that runs into my head. […]